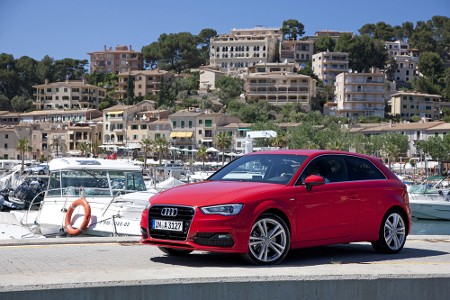 This is only the third Audi A3, believe it or not. It’s probably because the second one seemed to go through ten facelifts that the model seems older.

Nonetheless, it’s part of the fabric of UK roads now. And what’s not to like? It’s got an Audi badge, a lovely, practical hatchback, and it’s cheaper than other Audis by virtue of having a smaller number on the tailgate…

…or at least that’s how it used to be. Times have changed. There are smaller, cheaper Audis now, also with practical hatchbacks. All of a sudden, the A3 seems like a ‘proper’ Audi, so more than ever it’ll have to look and act like one if it’s going to cut the mustard.

Thankfully, cut the mustard it does. And some. The A3 may look dull on screen here, but on the road it feels like a genuine luxury car, with a cabin that looks fresh, yet is simplicity itself and built from stuff that other manufacturers just don’t seem to have access to.

It doesn’t spring any surprises – it’ll just about fit four adults in comfort, the boot isn’t much bigger than before, and it still has nowhere near the personality of a BMW 1 Series – but the quality and technology it comes packaged with put clear water between it and most other family hatchbacks. Probably all of them, come to think of it.

It’s not all lyrical wax, though. Audi still can’t make its regular stuff exciting to drive, and still has a preference for making its cars feel firm in an attempt to endow them with feel/sportiness. That said, the A3 is comfier than it was, and the optional Audi Drive select does a good job of flitting the major variables (steering, throttle, suspension, gearing) between soft and hard – relaxation and engagement, in other words.

If the sense of quality is a major plus in the A3, then running costs don’t lag far behind. The version everyone will buy, the 141bhp 2.0-litre TDI, does near enough 70mpg and will cost next to nothing in tax, while feeling genuinely quick. Even the petrols are good on fuel (50mpg), and there’s a 1.6-litre TDI on the way that will be London C-Charge exempt.

So, while you might look at the A3 and wonder what all the fuss is about, it’s the sort of car that does what the Golf does but cranks it up two notches: it’s advanced, solid and classy without having to scream about it. You’ll pretend you don’t want one, but really, deep down, you do.